When I run the following code in application(_ :didFinishLaunchingWithOptions) in iOS 15, the bar color turns transparent (thus, showing the black background underneath), while the same code works fine in iOS 14.5:

Here's the screenshots of Simulators running iOS 14.5 and iOS 15:

To restore the old look, you must adopt the new UINavigationBar appearance APIs, UINavigationBarAppearance. Remove your existing customizations and do something like this:

You can also use the appearance proxy with the code above, but substituting navigationBar.appearance().scrollEdgeAppearance = appearance for the last line (as you are constructing your own appearance object – the idea is to just make sure both scrollEdge and standard appearances are the same).

To restore the old look, you must adopt the new UINavigationBar appearance APIs, UINavigationBarAppearance. Remove your existing customizations and do something like this:

You can also use the appearance proxy with the code above, but substituting navigationBar.appearance().scrollEdgeAppearance = appearance for the last line (as you are constructing your own appearance object – the idea is to just make sure both scrollEdge and standard appearances are the same).

I'm seeing this issue too. I'm surprised that the default behavior is this and that it requires configuration now? I also had to set it for all appearance types to make it look better, but there are still cases where the appearance is strange especially in the transitions between view controllers.

I have the same problem. The code has to be inserted in each controller and the transitions between the controllers is buggy (Xcode Beta 2, iOS 15 Beta 2).

My problem is the missing top line in the TabBar. I can solve it only by adding a frame. But the frame would have to be visible only at the top. Does anyone have any ideas? Here is my current solution:

I'd be curious to hear if this helps for anyone else. I like this approach more as it feels less invasive than changing the appearance of the navigation bar.

This Navigation Bar Transparency problem began when Apple made Dark Mode. I told them about it and Apple fixed it but they have broken the Nav Bar again in iOS 15.

The issue persists on iOS 15 Beta 8. Tried on both light/dark theme.

This doesn't seem to work at all with the iOS 15 RC.

VC1 shows VC2. VC1 and VC2 are fine. Their navigation bars are the correct colour.

VC2 presents an image picker (of your library photos). Nothing I do seems to make the image picker use the right colours.

I've tried to use Rincewind's code to style the picker, but it just shows as light grey, with the nav bar buttons in white. I've implemented navigationController:willShowViewController:animated, but whatever I put in there is completely ignored.

It does seem that Apple decide to change the fundamental behaviour of something, and just assume that developers will change their apps to cope with it How about you give us a heads-up before you break our apps?

I've changed .barTintColor to UINavigationBarAppearance backgroundColor, set to standardAppearance and scrollEdgeAppearance and it works. But if present new ViewController modally with modalPresentationStyle == .fullscreen and dismiss, navigationBar's background color on the first one changed to default.

After a series of tests, I found the Settings the backgroundColor of navigationController is best Way to fix this

Once the color is set, everything is fine

After going through all the answers so far and trial and error in interface builder the problem is sorted for me after the following steps: (xcode 13 , iOS 13) 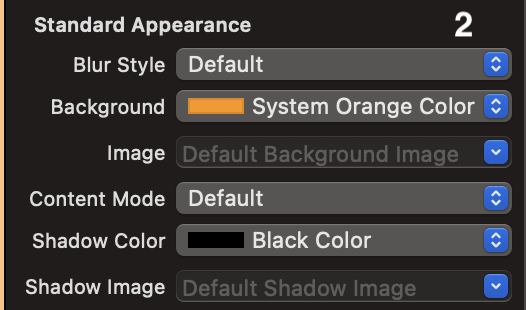 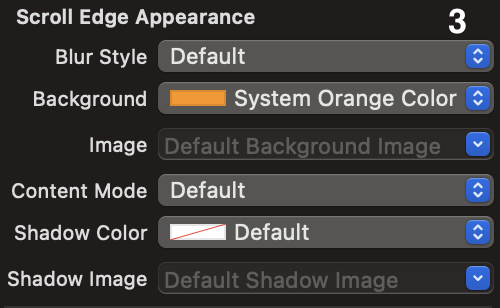 In case it helps someone, placing @Rincewind's code snippet in applicationDidBecomeActive restored the pre-iOS15 look of the navigation bar and ensured the navigation controller background view color updated when the user changed between light and dark mode while the app was running.

In case someone is having issues with navigation title font and color, add the following code to your extension