Behind the Design: Sky: Children of the Light 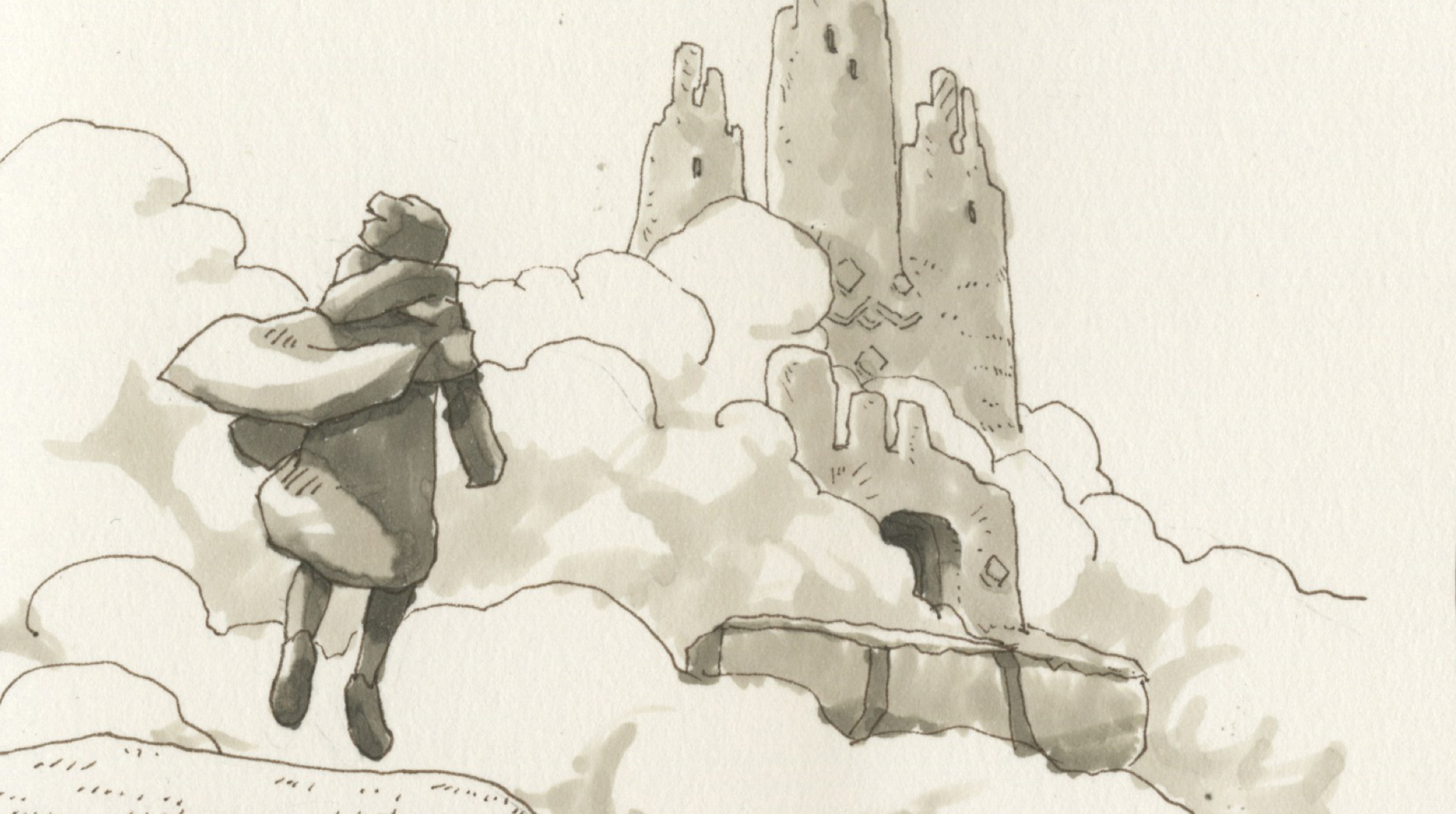 The greatest pieces of art resonate within your mind and capture your heart. They pull you into lush, beautiful narratives, and keep you dreaming about their stories long after you walk away. And they can take many forms. “Many people cry for a movie or novel,” Jenova Chen tells us. “The first entertainment that made me cry was a game.”

A former film student, Chen never planned on a career in game development — he wanted to tell captivating stories and touch people’s lives. But while in school, he soon found himself gravitating toward interactive media. Together with co-founder Kellee Santiago, Chen created thatgamecompany to enhance human connection by expanding the range of emotional experiences possible in video games. 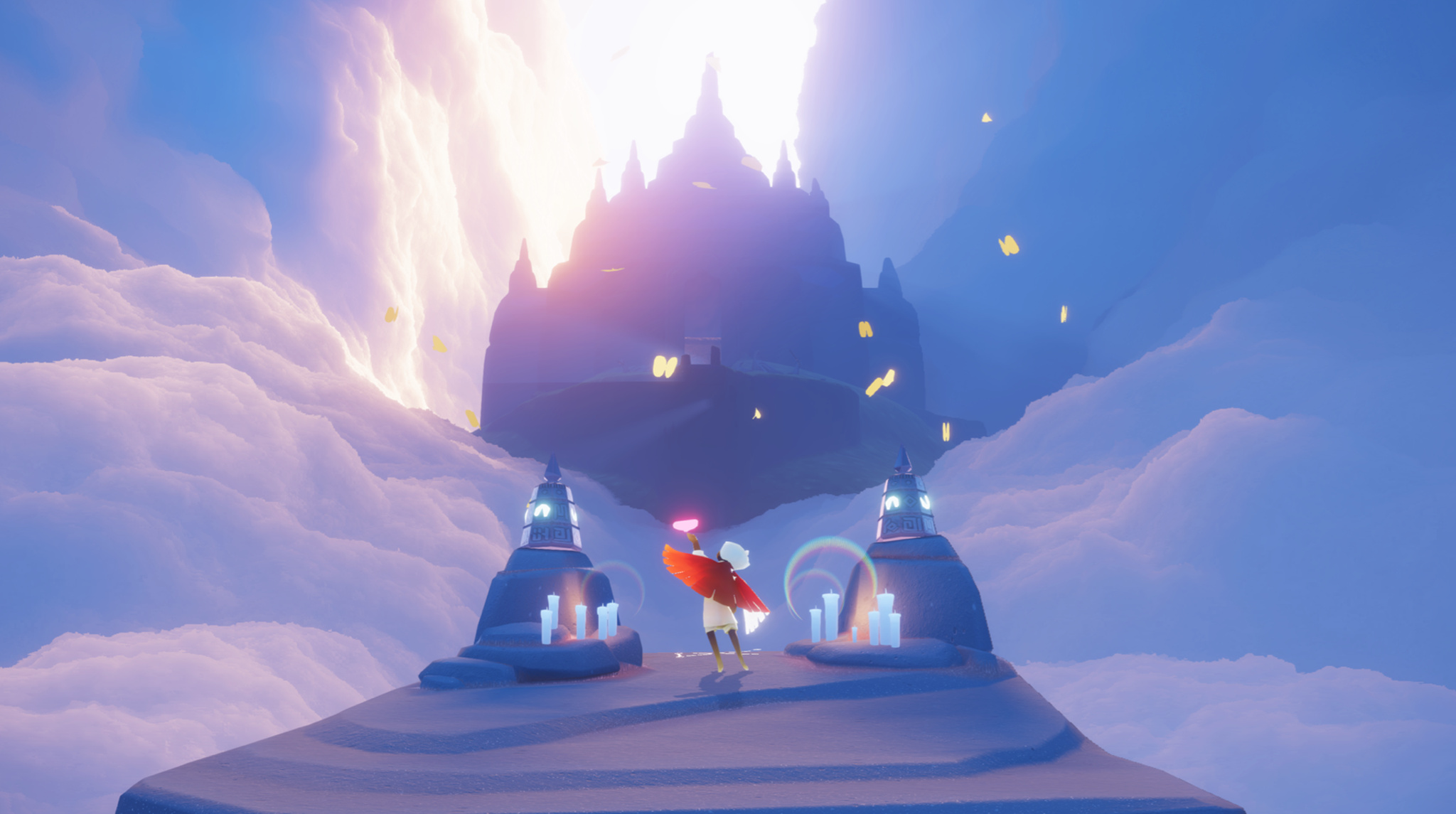 The world of Sky: Children of the Light.

“For the first 30 to 40 years, games were more designed for the core audience, the enthusiasts who embrace the new things,” Chen says. "But we are really now entering a new era… Everybody plays games.”

The studio’s first six years in operation resulted in Flow, Flower, and Journey, three award-winning games for Sony’s Playstation console. Their fourth game, Sky: Children of the Light, is the first created exclusively for iPhone and iPad. Though the artwork, controls, and story are new, the game’s spirit remains aligned with its predecessors: Make interactive art, designed for everyone.

We want to be the ultimate advocate for the human who plays our games.

Jenova Chen, creative director of Sky: Children of the Light

“At its core, Sky is a game about compassion and generosity,” Chen, the game’s creative director, says. “It’s about connecting people and nudging them to do good for each other.”

In Sky, players begin as a child of light, seeking fallen stars — the ancestral spirits of the realms. Players fly across cloudy dreamlike spaces, solving puzzles cooperatively and socializing within an enchanting world. While solo play is possible, Sky shines when fellow players work together. “It tries to evoke the bright side of humanity over the dark or the gray in an online game,” Chen says. 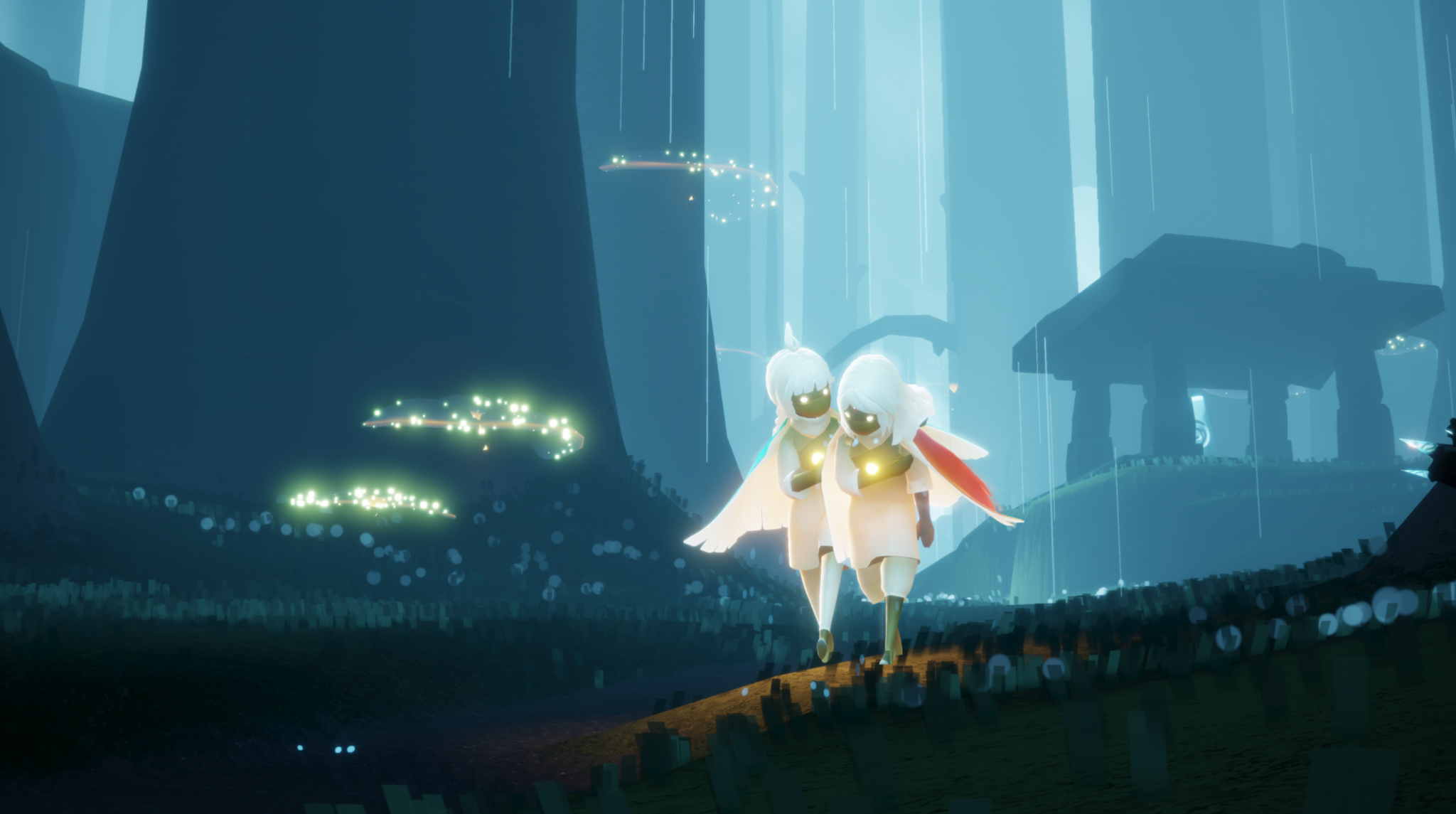 The multiplayer game celebrates collaboration and connection over competition.

Early on, it was clear that Sky would be an ambitious title for Chen and the creative team. This would be their first game for a mobile device, the first that relied on touch instead of console controllers, and their first attempt at an online multiplayer experience — one that celebrated connection over conflict. The team ultimately worked for seven years before bringing Sky to life, with more than 70 people contributing to the game over its creative development.

Chen was drawn to mobile gaming for Sky in part because of the approachability of iPhone and iPad. “When we design games, we should really think about accessibility and inclusion, to allow the game to be enjoyed by everyone,” he says. Consoles are expensive, and families generally only have a single piece of hardware and a few controllers within their household. In contrast, almost everyone owns a mobile device — it was the perfect platform for a multiplayer game that was open to all.

The transition from console to iPhone and iPad was a challenge for the entire studio. When the team began working on Sky in 2012, they were limited by the mobile hardware and screen sizes of that era — a far cry from the powerful Playstation infrastructure supporting their previous titles.

“Today, the iPhone is actually more powerful than the PlayStation that we developed for in the past,” Chen says, and Sky runs beautifully on both it and iPad. But to get there, the team had to iterate over multiple years of hardware and software updates. They were constantly refining the game’s look and feel, including developing a custom Metal engine to render Sky’s ethereal scenes, all while making sure the game would perform well and preserve battery life on device. 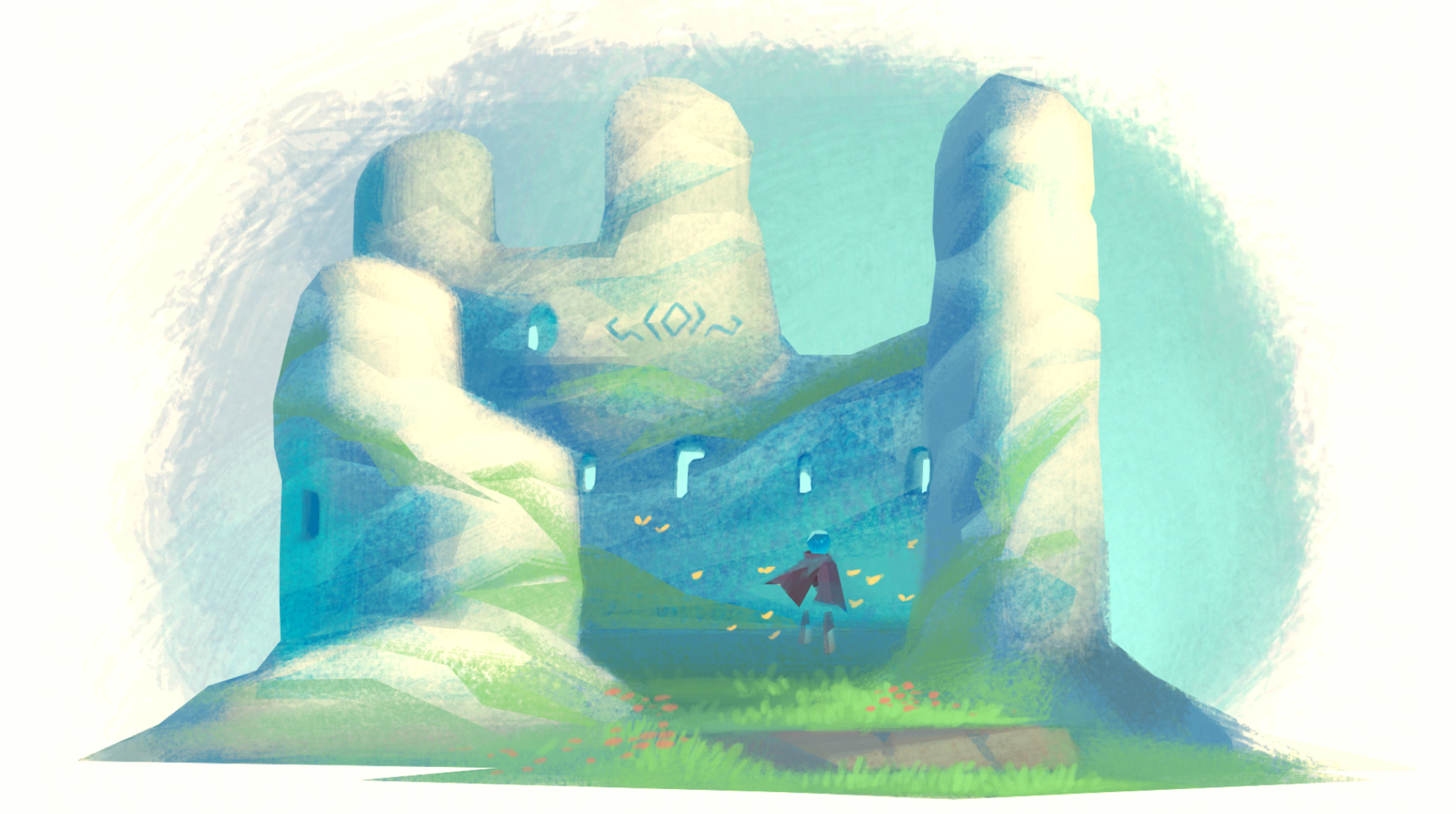 While engineers worked on the technical challenges, the game’s designers got to work creating the right control mechanisms and interface. “There are many, many barriers and design principles [on mobile] that are quite alien to console developers,” Chen says.

Chief of these was the touch screen: Players needed to traverse a three-dimensional space without physical buttons, triggers, or joysticks, and without on-screen controls blocking the game’s graphics or interface. “You're trying to find the right combination of design and feedback that is actually better than a real controller,” Chen explains.

A player’s past gaming history was also an important factor in designing the controls. While console gaming often requires players to interact with a physical controller using both hands, that wasn’t the case for casual gamers. “Players without a console controller experience would never put two hands on the screen at the same time,” Chen says.

After several years of experimentation — including, at one point, a fully-functional flight simulator — the team landed on a simple set of familiar controls designed to appeal to everyone. For extra guidance, Chen and team even provided subtle interface rings in each corner, which expand and contract to indicate range and speed control.

That wasn’t the last of the controller changes, however. After Sky’s initial release and feedback from players, the team also added a two-hand mode to the game for those who wanted more of a console-like feel. “This is the first time I’ve made a game where the control scheme was not finite,” Chen says. But he also acknowledges the beauty in creating a game on a living platform. “We are actually making changes because the habit of how people use their phone is changing.”

It’s this relationship between player and creator that Chen finds fascinating about games. As with any artistic medium, the creator has the power to help amplify feelings and guide people through a story — its rises and falls, surges and sudden stops. “For design and for entertainment, it is all about that change of acceleration,” Chen says. “That pulse is what touches us emotionally.” 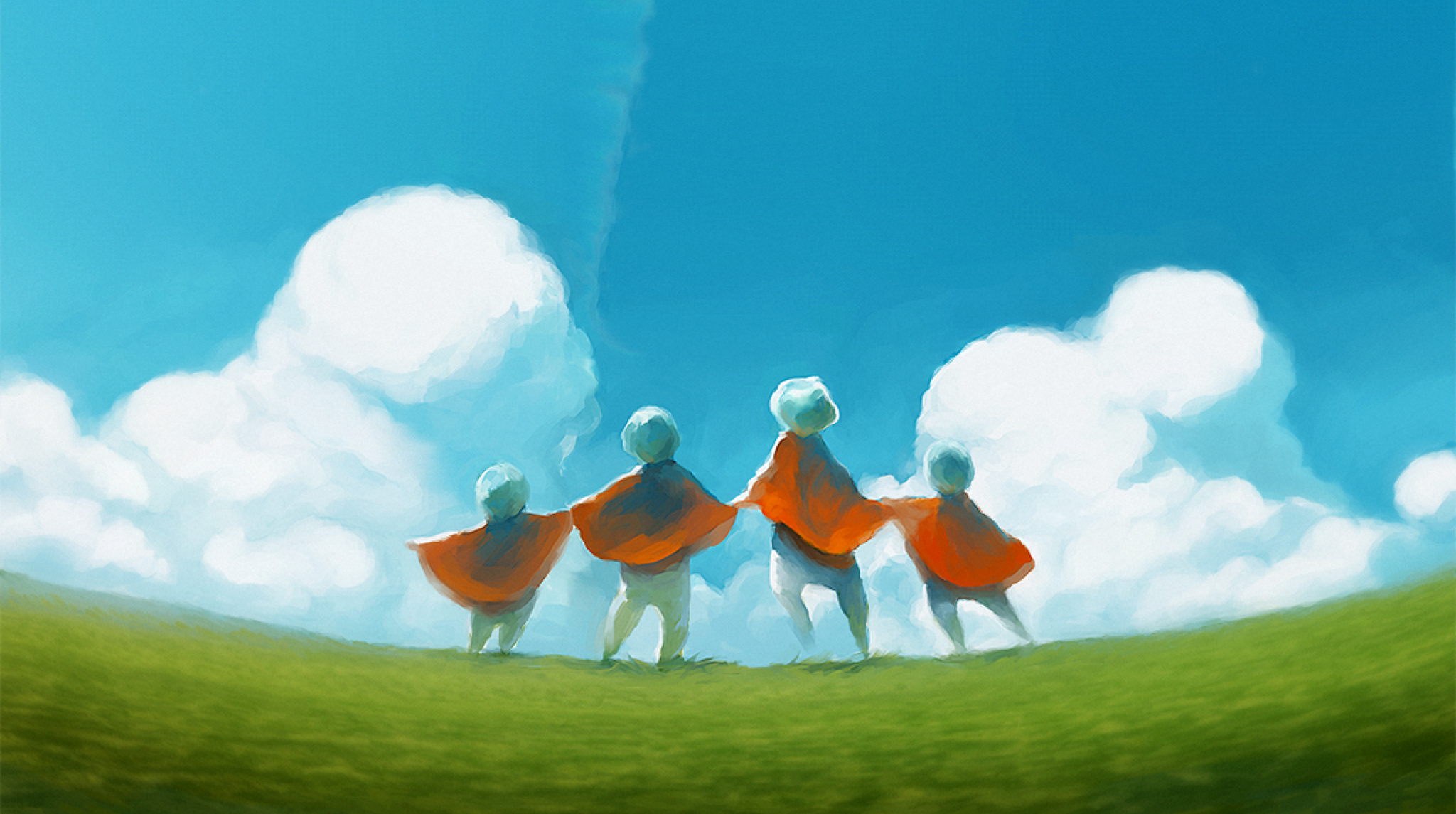 The interactivity of a game, however, creates a unique challenge for designers not to weigh too heavily upon the frame — to guide, but not to restrict. “The best design is a nudge, rather than a leash,” he says. “We want to make whomever is experiencing the [game] feel they are in control... We are not here to distract you. We are not here to force and bully you to do anything. We want to let you to make that [step]... and 100 percent own that experience.”

The designer is a powerful influence of what happens between the player who touches your interface and interacts with your game. With very small changes in the design, you can change how this person behaves, how they treat each other in your game. It's your responsibility... how are these players going to interact with your app, with your game, on a daily basis?

Jenova Chen, creative director of Sky: Children of the Light

It’s this balance and fervent commitment to storytelling and inclusivity that makes Sky a joy for all to play — and a 2020 Apple Design Award winner. “Hearing from people that they appreciate the work that we've done is the best reward, really,” says Chen. “Ultimately, we are serving others.”

Learn more about Sky: Children of the Light

Read more about Sky: Children of the Light on the App Store